The period between 8th century and 13th century is very important in the socio cultural history of India. During the same period, Shankaracharya, Madhvacharya and Ramanujacharya, who are the founders of three vedic religions, were living in India. Dwaitha, Adwaith, and Vishishtadwaitha; the three major philosophies also came into existence. Basaveshwara of Kalyana declared social revolution against caste and gender based discrimination. In order to achieve this ideal situations, the three Acharyas and Basaveshwara preached all the people to surrender to the God, irrespective of caste, creed and richness. They revived the society through Bhakthi Marga.
SHANKARACHARYA - ADWAITA
Shankaracharya Shankaracharya was born in the village Kaladi in Kerala in a Namboodari Brahmin family. His father was Shivaguru and mother, Aryamba. Shankara was very intelligent. At the age of seven, he had mastered all the scriptures. He learnt Vedas and the Puranas from his teacher, Govinda Bhagavatpada. Shankaracharya studied the Upanishads and Brahmasutras in depth and propagated the Adwaitha philosophy. According to this, Brahma is the absolute truth, the rest of the world is false. The soul is one with Brahma, and life is not separate from Brahma.
The world is maya, an illusion; Brahma is the absolute truth. People are ignorant; they are not aware of the illusionary nature of the world. They are also not aware that Brahma is the only Truth. Hence we should go on the path of knowledge, and realize the nature of the world. Ultimately, we should merge our ‘atma’ (soul) with the absolute truth, Brahma. Only then we can attain moksha (liberation). In this manner,
Shankaracharya taught the path of knowledge. The human soul has no separate existence and he expressed this fact in the phrase ‘Aham Brahmasmi’. He declared that Brahma is Truth. It has no qualities, no features and no shape (nirguna, nirakara, nirvikara). The works of Shankaracharya: Shankarabhasya, Anandalahari, Soundaryalahari, Shivanandalahari, Viveka choodamani, Prabudda sudhakara and Dakshinamurthy stotra. His hymn ‘‘Bhajagovindam’’ is world famous. Shankaracharya travelled from Kanyakumari to Kashmir on foot and propagated his Adwaitha philosophy. In order to spread the message of his philosophy, he established peethas (institutions) in all the four directions. Shankaracharya gave Indian thinking a new direction and inspiration. The peethas established by Shankaracharya : 1. Badari - Jyotir peetha 2. Dwaraka - Kalika peetha 3. Puri - Govardhan peetha 4. Sringeri - Sharada peetha 5. Kanchi - Kamakoti peetha

RAMANUJACHARYA - VISHISTADWAITA
Ramanujacharya Ramanujacharya was born in Sriperambudur near Chennai. Keshava Somayaji was his father and Kanthimathi was his mother. He studied Veda and Upanishads at Yadavaprakash in kanchi, the famous learning centre in South India. Then, he went to Srirangam and became head of a mutt.
The Chola ruler who was shaivite started pestering Ramanujacharya. He was invited by Bittideva, the Hoysala King of Karnataka. It is said that later Bittideva accepted Vaishnava tradition and became Vishnuvardhana. Ramanuja went to Melukote and built Cheluva narayana temple. Ramanujacharya had keen interest to show the path of salvation to the common people. His philosophy is called as ‘Vishistadwaitha’. According to this philosophy Jeeva (life) and Prakruthi (Nature) are under the control of Bramha. Both Atma and Paramathma cannot become one simutaneously.
He said that world is the expressed manifestation of Bramha and world is a reality. In order to achieve Mukthi (salvtion) Bhakti and Prapathi (complete surrendrance to god) are important. Ramanuja charya criticised ‘Caste system’ and preached his teachings to all. He taught them to stay away from desires and surrender themselves to the will of God with complete devotion. Like this he advocated Bhakti path for Moksha.
Ramanujacharya studied many religious texts and wrote many books like: ‘Vendanta Sangraha, Vedanthasara, Vedanta Deepika, Sribhasya’. He has given importance and prominence to Bhakthi path in his important book ‘Geetha bashya’. Saint Ramananda and Rayidasa of North India were greatly influenced by Ramanuja charay’s philosophy. Similarly the Araveedu and Tuluva dyansties of Vijayanagara Kingdom were the followers of this philosophy.

MADHWACHARYA- DWAITA
Madhwacharya was born in Pajaka village near Udupi in Karnataka. His father was Madhwagehabhatta and mother Vedavati. Lord Vishnu was their family deity. It is said that at a very tender age, he displayed abundant knowledge. He had his education in Vedas and Upanishads from Achyutapreksha. The same teacher later inducted Madhwacharya into sanyasa. While studying under his guru, Madhwacharya independently gained great knowledge about the religious scriptures and defeated his guru in a debate. He advocated ‘Dwaitha’ philosophy. Dwaitha means two.
According to this philosophy, the human soul and the Divine soul are separate. In order to propagate his philosophy, Madhwacharya took to piligrimage to various places and participated in debates. He brought Lord Krishna’s idol which was hidden in a muddy hillock called Gopichandana and installed it in Udupi. Further, to enable regular worship of Lord Krishna, he established eight mutts called the Ashthamaths.
According to Madhwacharya, the world is not maya or illusion. It is as true as Paramatma or the Divine Soul. Between these, the Divine soul is independent and the rest of the world is illusionary. The Divine soul and the human soul have a Lord and Servant relationship. Lord Vishnu or Narayana alone is supreme. Worship of Lord Vishnu can elevate the human soul and thus enable it to attain moksha. Works of Madhwacharya: Geetabhasya, Geethatatparya nirnaya, Mahabharata tatparya nirnaya, Vishnutatparya nirnaya, Bhagawata tatparya nirnaya, Mayavadakhandana etc.
Later the philosophy of Madhwacharya was popularised by Padmanabha Theertha, Narahari theertha, Vijayendra theertha and Vaadiraja theertha and others.
BASAVESHWARA
Basaveshwara is the most prominent social reformer of medieval Karnataka. Basaveshwara and his disciples advocated Veerashaiva philosophy which was based on simple human values. They rejected the numerous rituals deeply rooted in the Vedic religion. Basaveshwara was the son of Madarasa and Madalambike of Bagewadi of present Vijayapura. Basaveshwara was a strong opponent of caste system and he threw away the ‘Sacred thread’ after his Upanayana (the thread ceremony), and went to Kudalasangama. 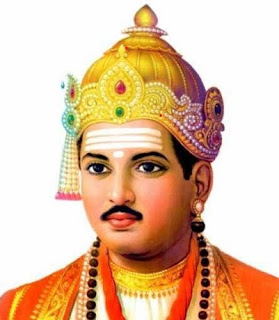 He took linga deekshe from a shaiva Guru and started practising meditation. Do you know this? Ashtha mutts: Palimaru, Adamaru, Krishnapura, Puttige, Shirur, Sode, Kaniyoor and Pejawar mutts. Basaveshwara . Though Basaveshwara became the treasury head of Kalachuri Bijjala King, he remained unmoved by money, status and power. He dedicated himself to the removal of social evils from the society. He remain committed to the revival of social centric religion. Basavanna started this socioreligious movement from Mangalakeda. Shivasharana should never discriminate anyone on the basis of caste and he also said that purity of Atma is the only way to attain Mukthi (salvation).
He also advocated ‘self Reliance and insisted one should earn one’s living’. He also declared no profession is more important or less important. He nurtured the culture of ‘Work is workship’ through his physical labour philosophy. By declaring “ Body as the temple”, Basaveshwara tried to implement work is workship philosophy in life.
These thinkings are still the guiding lights of the present society. Basavanna started a Sharana spiritual centre called “Anubhava Mantapa” at Basava kalyana of present Bidar. Here all Sharanas including Basaveshwara and others engaged in meaningful discussions on various socio cultural issues like gender discrimination and caste system. Similarly they were also discussing the short comings of religions and were suggesting remedies to these issues. Spiritual discussions were also held regularly.
They were inisting that one should remain transparent in his life. His external behaviour and internal thinking should remain clean. This transparent state of life is the ‘ultimate truth’ they declared. All these thought gained poetic expressions in their ‘Vachanas’, the simple poetic compositions.
The Vachanas written in simple Kannada could reach the common people and created a social movement This movement remained pro people movement due to its simple Kannada. All humans are equal. No one is untouchable by birth. Only the profane thoughts and behaviour makes one an untouchable, declared the Vachanas. Through Vachanas, the vachanakaras tried to identify the problems inherent in the society of their times. People from all walks of life look part in this vachana movement. Allamma prabhu, Akkamahadevi, Siddarama, Molige Maraiah, Ambigara chawodaiah, Madivala Machaiah, Madara chennaiah, Haralaiah, Kinnari Bommaiah and many others, were the important Vachanakaras. Many Vachanakaras along with Basaveshwara who had kept formation of equal society as their goal, have enriched and contributed a lot to society, culture and literature.
Share on FacebookTweet on TwitterPlus on Google+